Share your idea, put up your feet, stay awhile. 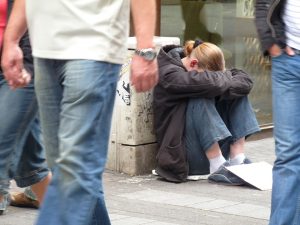 The words – homeless veterans are two words that should never have to be heard. Unfortunately that is not the case. The homeless veteran epidemic is alive and well in cities and towns across America. As of January 2017 there were over forty thousand men and women homeless veterans.

When you think of a homeless veteran, an image of a man immediately comes to mind. However the women comprise the fastest-growing segment of the homeless veteran population. Of the forty thousand veterans that were homeless, approximately nine percent were women. From January 2016 to January 2017, homeless female veterans increased seven times more that their male counterparts.

One in four women say that they have experienced sexual trauma or assault while on duty. They also say that this was a significant reason for being homeless.

Treatment facilities are overwhelmed with cases and are too shorthanded to adequately address everyone’s issues.

Being able to treat the entire person in the form of mind, body, and spirit helps female veterans regain their sense of self-worth and dignity, allowing them to transition back into the community.

There are many pressing problems facing agencies and communities. One of the main issues in solving this problem are the diverse interests and ideas of how to address the situation. Communities and their leaders must come together and make the veteran homeless epidemic a top priority.

Some of the issues that must be addressed are the mere fact that the homeless problem cannot be turned around. Another is that resources will be taken away from other important social problems and applied to homeless veterans. Thus, leaving less resources for other social projects. Many feel that if veteran homelessness ended that the funding would also.

One of the ways that has had a great impact on the problem is community support. The donations of individuals have helped to bridge the financial gap. Fundpey.com and the National Coalition for Homeless Veterans has set up a crowdfunding campaign aimed to end veteran homelessness. Just click the link above and make a donation. Our veterans deserve a place to call home.